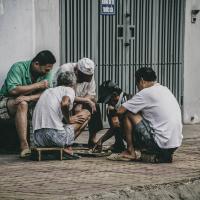 About half of Californians working in the gig economy are struggling with poverty and a majority of the residents say the American Dream is harder to achieve in their state than elsewhere in the United States, according to a survey released Tuesday.

The 2018 California Workers Survey defined the gig economy as including jobs with ride-hailing platforms such as Uber and Lyft, and providing services such as shopping, delivering household items or assisting in childcare. According to the report, about 48 percent of those participating in the gig economy are struggling with poverty.

California ranks as the fifth-largest economy in the world, but its high cost of housing in many parts of the state mean more than one in five children live in poverty, according to the California Budget & Policy Center, an independent policy research center based in Sacramento.