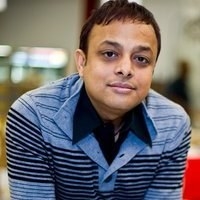 Mohan J Dutta is Provost's Chair Professor and Head of the Department of Communications and New Media at the National University of Singapore (NUS), Adjunct Professor at the Interactive Digital Media Institute (IDMI) at NUS, and Courtesy Professor of Communication at Purdue University. At NUS, he is the Founding Director of the Center for Culture-Centered Approach to Research and Evaluation (CARE), directing research on culturally-centered, community-based projects of social change. He teaches and conducts research in international health communication, critical cultural theory, poverty in healthcare, health activism in globalization politics, indigenous cosmologies of health, subaltern studies and dialogue, and public policy and participatory social change. Currently, he serves as Editor of the "Critical Cultural Studies in Global Health Communication Book Series" with Left Coast Press and sits on the editorial board of seven journals. Before arriving to NUS, he served as Associate Dean of Research in the College of Liberal Arts at Purdue University, a Service Learning Fellow, and a fellow of the Entrepreneurial Leadership Academy. Also at Purdue, he served as the Founding Director of the Center for Poverty and Health Inequities (COPHI), where he continued to hold an Affiliate appointment.