A Worker’s Place Is in the Museum 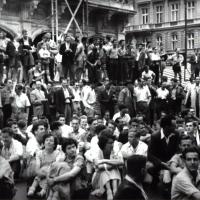 Not many museums have mounted a collection of photographs and ephemera that chronicle the history of worker organizing and the labor movement. That’s not surprising. Museums and their special exhibits are underwritten by foundations, corporations and the very rich—funders that, by and large, are not known for their concern for those who toil for a living and seek to better their lives through union representation.

One enters this special exhibit at the Museum of the City of New York through a montage of photographs of demonstrators holding placards that read: “Abolish Slavery,” “We Want Respect for Workers,” “Put Black Men to Work or Stop Construction,” “Mt. Sinai Workers Can’t Live on $32 a Week—On Strike” and “Carwasheros al Poder” (Power to the Carwashers).

The exhibit begins with the enslaved people of New York (40% of New York households owned one or more workers in colonial days) and continues through today’s movement of minimum-wage slaves and the Fight for $15.

In the book that accompanies the exhibit, labor historian Joshua B. Freeman writes, “The city of New York would not exist in anything like its current form without the struggles of working people over the past three centuries.” Similar stories could be told of any number of cities across the country—cities where labor history exhibits could be mounted, if not for want of museum space, cities where the struggle of workers continues to this day.