No Drips, No Drops: A City Of 10 Million Is Running Out Of Water 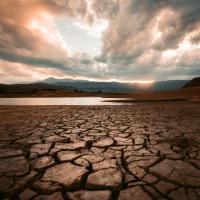 In India's sixth-largest city, lines for water snake around city blocks, restaurants are turning away customers and a man was killed in a brawl over water. Chennai, with a population of almost 10 million, is nearly out of water.

In much of India, municipal water, drawn from reservoirs or groundwater, typically runs for only a couple of hours each day. That's the norm year-round. The affluent fill tanks on their roofs; the poor fill jerrycans and buckets.

Satellite images of the city's largest reservoir, Puzhal Lake, taken one year apart, reveal a chilling picture. Since June 2018, the lake has shrunk significantly. Puzhal is one of the four rain-fed reservoirs that supply water to most parts of Chennai.

A 2018 government think tank report projected that 21 major Indian cities, including the capital, New Delhi, and India's IT hub, Bengaluru, will "run out of groundwater as soon as 2020." Approximately 100 million people would be affected, the report predicts.

Public institutions are suffering. Hospitals and nursing homes are charging more for services to cover the increased cost of water, according to the local press. There are also reports that toilets at schools are dirty due to a lack of water.