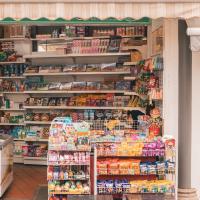 In some neighborhoods across the country, such corner stores often stock more alcohol than food — and poor-quality groceries at that — amid a minefield of violence just outside their doors. Yet especially for many of the country’s poorest residents, the shops are among the few options for buying groceries using the federal Supplemental Nutrition Assistance Program food benefit.

Nationwide, according to the U.S. Department of Agriculture’s Food and Nutrition Service, convenience stores make up about 45% of all authorized retailers accepting SNAP benefits, the modern name for food stamps.

This city of fewer than 27,000 people, just across the Mississippi River from downtown St. Louis, has about three dozen authorized SNAP shops, mostly corner stores, within 89 blocks. But fewer and fewer residents see the shops as a safe place to buy food.

Amid the federal whipsawing over SNAP, local residents are taking care of the problems themselves, trying to clean up the corner stores in their neighborhoods so they have safe and healthy options.

Those communities attempted to solve their corner store problems by first addressing the number of alcohol outlets in residential areas. Studies show that alcohol plays a role in 40% of violent crimes.