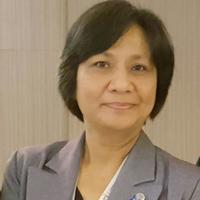 Dr. Evi Fitriani is a senior lecturer of the International Relations Department, Faculty of Social and Political Sciences, Universitas Indonesia (Dept. HI FISIP UI) and the Head of the Department from 2012 to 2016. Currently, she is the Head of Miriam Budiardjo Resource Center of FISIP UI. She is co-founder of the University's Master Program of European Studies as well as the ASEAN Study Center of FISIP UI. She is also the Indonesian County Coordinator of the Network of East Asian Think-tanks (NEAT). She completed her doctorate program at the Australian National University (ANU) in 2011 after being trained in Indonesia, the UK, and the USA, as well as in Japan, Sweden, the Netherlands, and Hungary. She has obtained more than 13 international awards, including the British Chevening Awards, Fulbright Scholarship, Australian Development Scholarships, JICA and SIDA Grants as well as EU Fellowships and Jean Monet Network Grant. Over the last 20 years, she has involved in international collaborative researches or projects. Evi's research interests are Indonesian foreign policy, ASEAN, Asian regionalism, Indonesia-Australia relations, and Asia-Europe relations. Evi's book includes Southeast Asians and the Asia-Europe Meeting (ASEM): States interests and institution's longevity (ISEAS Singapore 2014). She is the author of eight book chapters in volumes written with international peer groups including Asian Countries' Strategies towards the European Union in an Inter-regionalist Context (National Taiwan Univeristy Press, 2015), Europe in Emerging Asia (Rowman & Littlefield International, 2015), The Yudhoyono Presidency: Indonesia's decade of stability and stagnation (SEAS Singapore, 2015), and Inter-regionalism and the European Union: Competing Perspectives on Regional Cooperation (Ashgate, 2015) as well as Muddy Boots and Smart Suits: Researching Asia-Pacific Affairs (ISEAS Singapore, 2017). She also contributed to policy recommendation to the Indonesian Government as well as international institutions like APT-through NEAT- and ASEM through the document submitted to the ASEM Summit, Asia-Europe Connectivity Vision 2025: Challenges and Opportunities (ERIA, 2016). Her latest publication appears in the Journal of Contemporary Southeast Asia (April 2017) on "The Trump Presidency and Indonesia."

Learn more about the Global Studies Advisory Board here.