Trade Dispute Between U.S. and China Deepens as Beijing Retaliates 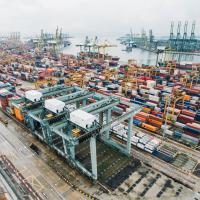 The United States and China intensified their trade dispute on Monday, as Beijing said it would increase tariffs on nearly $60 billion worth of American goods and the Trump administration detailed plans to tax nearly every sneaker, computer, dress and handbag that China exports to the United States.

Financial markets fell on Monday after China detailed plans to increase tariffs, with the S&P 500 index down more than 2.4 percent for the day and more than 4 percent this month. Shares of companies particularly dependent on trade with China, including Apple and Boeing, fared poorly, and yields on three-month Treasury securities exceeded those on 10-year bonds, a sign that investors may be souring on the outlook for short-term economic growth.

Both China and the United States have left a window for negotiators to try to reach a deal before the latest round of higher tariffs goes into effect. China said it would delay the higher rates until June 1, while Mr. Trump’s new 25 percent rate affects only products sent to the United States as of May 10, leaving a two- to four-week gap from the time most goods leave China by boat to when they arrive at an American port.