Ringing The Changes: How Britain’s Red Phone Boxes Are Being Given New Life 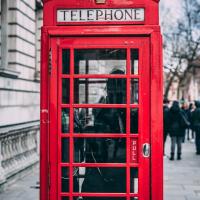 John Farmer, who describes himself as an activist shareholder, is a man with a mission – to save Britain’s red phone boxes. These were once a feature of every high street in the country, but now number only 10,000 or so (and half of those are decorative rather than operational).

In 2015 the traditional red phone box was voted the greatest British design of all time, ahead of the Routemaster bus, the Spitfire, the union jack and Concorde.

There are still numerous Scott kiosks in central London, many of which have been listed as historically or architecturally significant – a response to the destruction of many boxes by the newly formed British Telecom in the 1980s.

Across the UK, more than 3,000 kiosks have been listed, including all the K2s, so there is no danger of them disappearing from Britain’s streets.

Since 2008, rather than remove decommissioned ones that have not been listed, BT has allowed local councils and charities to repurpose them under its adopt-a-kiosk scheme. More than 5,000 have been adopted.

Scott’s kiosks are loved in part because they are redolent of a time when the British were willing to build a small house from which anyone could make a call. They represent civic pride and national confidence – both now in short supply.