Housing Discrimination Made Summers Even Hotter 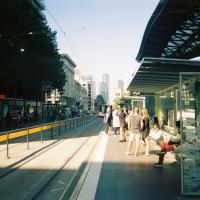 American cities face increasingly unbearable summers—but the heat isn’t distributed equally. Low-income and minority neighborhoods can get significantly warmer than their surrounding areas due to the urban heat island effect. These areas typically lack trees and other cooling infrastructure that provide shade during the day, and stay uncomfortably warm at night as the heat absorbed by impervious surfaces escapes back into the air.

A new study finds that these disparities correlate closely with neighborhoods that were subject to decades of housing discrimination through federal redlining policies that prevented African Americans from buying homes in certain neighborhoods during the New Deal era.

The finding adds to the body of research on how redlining has imposed decades of economic and health disparities on black and brown communities—in ways that are now being exacerbated by climate change.

Historically, wealthier neighborhoods were greener, with more parks and greater tree density to provide relief from the heat. That remains true today. Developers meanwhile, had more incentives to construct buildings and roadways through the lowest-income communities.